Canada’s Immigration minister Sean Fraser claimed that Canada had reached the 300,000 level sooner this year than in any previous year. Previously Canada has accepted this much immigrants only six times in 1911 to 1913 and again in 2018, 2019 and 2021.

Canada had a drop in immigrants in 2020 due to pandemic and travel restrictions but in 2021 canada accepted a record number of 405,330 immigrants.

So far, data on the IRCC’s open data portal has provided the number of new immigrants up until June 2022. The July and August results will be announced in the coming months.

By the end of June, around 231,620 immigrants had arrived in Canada. The change in numbers from the end of June to the end of August implies that Canada accepted around 68,000 permanent residents over the period of two months.

If this rate continues then Canada is on track to welcome a record 431000 immigrants in 2022 and even may surpass this number and break the record of 2021. 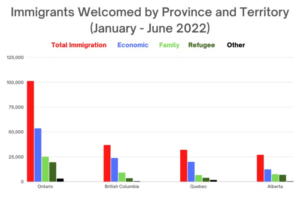 Quebec received the third-highest number of immigrants overall, with 31,880 arriving in the first half of the year. With 26,920 immigrants, Alberta ranked fourth.

According to the 2022-2024 Immigration Levels Plan, Canada expects to admit more immigrants this year and next year through its Provincial Nominee Program (PNP) than through its Express Entry-managed programmes. This has not occurred since 2015, when Canada implemented the Express Entry system.

Canada relies on immigrants to meet the shortage in labour market, as recent statistics shows Canada has around 10 Lakhs job openings and 4.9% unemployment rate with is setting record. Due to this Canada is experiencing labour shortage in many industries. This is exacerbated by the fact that nearly nine million Canadians will reach retirement age by 2030, and still the birth rate in Canada is lowest among G7 countries at 1.4 children per woman.

To resolve the labour problem in Canada, Canada will continue to welcome more number of immigrants and is planning to welcome 450,000 new immigrants in 2024. Some provincial governments are urging Canada to do more to attract skilled immigrants and to give them more input over immigration.

Canada is also making renewed efforts to make the application process easier and more streamlined for applicants. IRCC has recently announced several measures to clear the current backlog of applications as well as improvements to the client experience. Starting September 23, immigration applications will go 100% digital and by spring of 2023 IRCC will launch application status trackers for seven additional permanent residence and temporary residence programs.